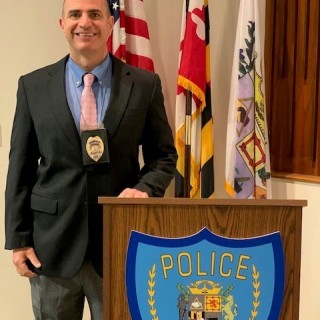 Mayor Craig A. Moe, and Police Chief Russ Hamill, are pleased to announce Mark Plazinski as the new Deputy Chief of Police for the Laurel Police Department.  Deputy Chief Plazinski was sworn in on December 7, 2020.

Plazinski, who is a lifelong resident of Maryland, served for 26 years as a law enforcement officer for the Montgomery County Police Department.  Throughout his time with Montgomery County, he was afforded the opportunity to work across the entire department in all facets of policing.  Most recently he served as the District Commander of the 5th District, overseeing over 140 sworn personnel and directing the daily operations of the District Station.  He has dedicated his career in working to improve community relations with all members of the community and built strong partnerships with various levels of government, schools, community leaders, and citizens.

“I am humbled and honored to be selected as the Deputy Chief of Police for the City of Laurel.  I look forward to meeting the officers, residents, business owners and all of the people who visit and work in the city. I am grateful to become a part of this department as it has a great reputation in the region and am eager to start building relationships within the community.”, Deputy Chief Plazinski said.

The Mayor and City Council, along with Chief Hamill, wish to extend a very warm welcome to Deputy Chief Plazinski and his family to the Laurel Police Department family and the City of Laurel community.