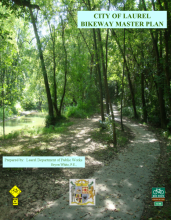 The City of Laurel’s high population density, many retail offerings, expansive public park system, and compact size encourage the accomodation of transportation modes that differ from the omnipresent automobile.  With that in mind, the City's vision is to provide a safe and viable means for pedestrians and bicyclists to safely and easily navigate City streets and take advantage of all the City has to offer.

To that end, In August of 2009, the City of Laurel presented the Laurel Bikeway Master Plan for public comment.  In late September, 2009 the Mayor and City Council of Laurel approved and adopted the plan through Resolution No. 10-09.  As the City grows and changes, so should the Bikeway Transportation Plan.  To assure this, and to accommodate any new growth or revised land use, the Plan will be reviewed and updated as necessary every five years.  The adopted Bikeway Transportation Plan will be an adjunct to the City’s Master Plan and will be part of Adequate Public Facilities review for all future developments. 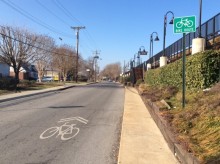 The first two streets designated as bike routes in the City were 4th Street and 5th Street.  A public hearing was held at City Hall in January 2010 on the topic of adding two miles of bike lanes along 4th Street and 5th Street.  The on-street bike lanes are to connect the Riverfront Park trail to the paths around Gude Lake Park.  In addition, 4th Street provides direct access to Main Street, the Historic District, and the Towne Centre at Laurel.

Lafayette Avenue is designed as a shared bikeway in the Bikeway Master Plan.  The pavement markings “sharrows” and bikeway signage were installed along Lafayette Avenue from Bowie Road to Main Street, for a total length of 0.6 mile.  This project was completed in May 2013 and was funded by the City and MDOT Bikeways Program.

After resurfacing Mulberry Street, the City incorporated bike lanes from Cypress Street to Laurel Place, for approximate 0.5 mile.  This improvement included pavement markings and signage installation to provide 5 foot wide on–street bike lanes on both directions of Mulberry Street.  This project was completed in October 2013.

There is a 10-foot wide bike path (hiker biker trail) running on the east side of Van Dusen Road from Contee Road to Cherry Lane for a total of 0.9 mile.  The first part of the bike path was constructed in 2007 and it connected Cherry Lane to Killbarron Drive/ Olive Branch Way.  In April 2016, the City completed a three year project that extended the Van Dusen Road Bike Path by 0.5 mile to the south, connecting it to Contee Road.  Thanks to MDOT’s strong support, the City received a total of $240,000 in grants from the Bikeways Program for this extension project, including $40,000 for the design and $200,000 for the construction.

Laurel Place bikeway is a mixed shared-use roadway with on-street bike lanes along both directions. Laurel Place is a critical link that runs parrallel to Route 1, connecting many amenities directly, such as Towne Centre at Laurel, Laurel Lakes Center, and Granville Gude Park/Laurel Lake.  This project was completed in May 2017 with City funding and MDOT Bikeways Program grants.

DPW has developed a database for recording bike crashes.  The database uses police recorded crash reports and is continually updated.  A map of the bike crashes from the preceeding three years can be found at the link below.